Difference Between AngularJS and Angular

You might have noticed different version of angular, We have Angular 6, 5, 4, 2, 1. So question arises What's up with all of these versions? The answer is Angular 2 is complete rewrite of Angular 1, which was the first Angular framework released and that was released quite a couple of years ago. Angular 1 was the first framework to really make single page applications and this better way of manipulating the DOM popular back in the times. However Angular 2, was a complete rewrite to fix many of the problems Angular 1 had, mostly performance issues. However Angular 4, 5 and 6 really are just the latest versions Angular 2. So in general, Angular 2 or higher is refer to as Angular. So the framework is now called Angular and it simply has different versions. Angular 1, on the other hand, is not related to these versions, so it is not related to Angular 2 and above and therefore Angular 1 is referred as AngularJS to differentiate these two frameworks. 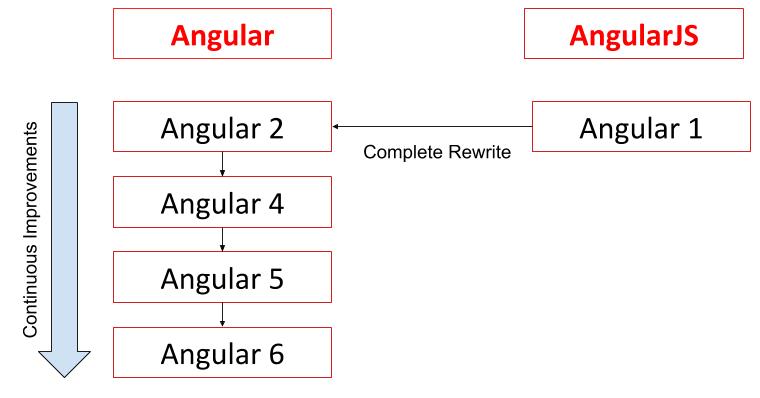 Now the Angular framework, whose is currently has its sixth release. Every new release is not a complete rewrite of the old release but instead it receives incremental small improvements, some tweaks and some tiny adjustments.