Posted Under: Download Free Malware Samples , EXE, Malware, Malware Analysis, Windows, Wiper on Feb 18, 2018
Olympic Destroyer as the name implies is a malware / worm designed for destruction and sabotage the of on going Winter Olympic games in Pyeongchang, South Korea.

In a nutshell, Olympic Destroyer steal credentials stored in the browser, i.e. Chrome, Firefox and Internet Explorer. It also steal credentials from of the local system. It propagates by discovering the network the infected machine is connected. Every time it propagates it create a new mutated copy of itself which contains the credentials of all of its previous hosts its infected and hard coded credentials which were put it by its authors.

Then its destructive mechanism is kicked in and it deletes the OS system backup catalog which make recovery difficult. It also disables BCEdit.exe, which is pre-boot Windows recovery console, so that window do not try to repair itself. Stop all the services and removes its activity from event logs and ultimately shut down the system, which then fails to start.

For more details see VirusTotal analysis which can be found here. 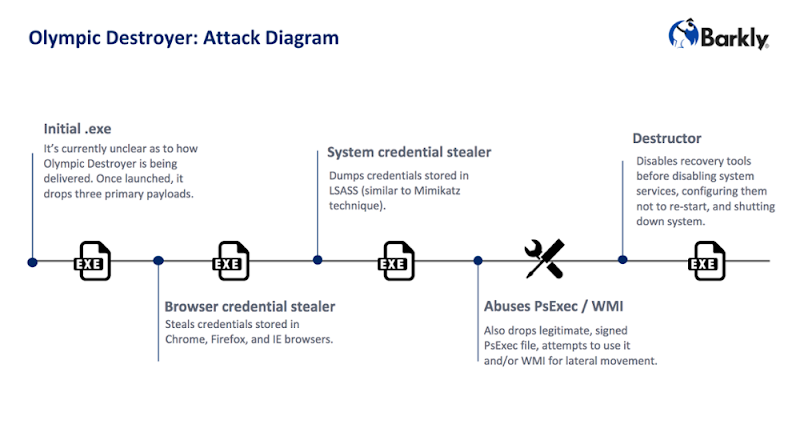